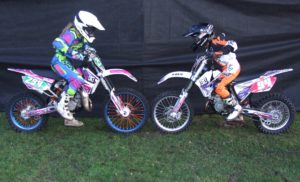 Emily and Josh Noon live in Worcestershire, both racing with the Cotswold Club and are very passionate about motocross, both their own competing and also watching their idols on TV and in real life.

Emily is 13 as the 2015 season starts and completed her third year of racing in 2014 on a KTM in the SW85 class. Emily’s highlights from 2014 in the SW 85 class were achieving 19th overall in the Bridgestone BSMA Clubmans Series and first girl, 8th Overall in the Cotswold Club Championship, 5th Overall in the Rhayader Club Championship, 24th in the BSMA Finals and first girl. Her self confessed greatest weekend of her life was when she raced at her best for 4th overall in the UK Girl’s Nationals at Upton Court. Emily’s strong point are her starts, often powering through the first few turns mixing it with the front runners. Emily’s low point of 2014 was watching her brother injure himself on day one of the May two day Cotswold race meeting at Longdon, and then crashing herself on day two in a first lap pile up, burning her arm from a spinning wheel whilst trapped underneath. Her courage and determination showed through as she refused to get into the ambulance for treatment unless she was assured the race re-start would not happen without her! The scarring remains as a reminder of her tough character. Outside of motocross, Emily enjoys athletics, netball, hockey and football. Her role models in life are Jolene Van Vugt, Livia Lancelot & Ken Roczen. She moves up to the BW85 class for 2015 on her KTM to compete in the Rhayader and Cotswold club championships, the BSMA Clubman’s Series and the Girl’s National event in September. 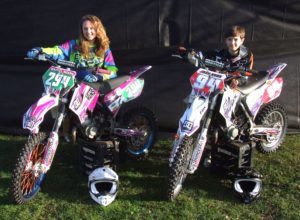 Josh is 11 as the 2015 season starts and completed his third full year in 2014, on a KTM 65 in the Juniors. Josh had a tough year in 2014, picking up a horrible double break of his left forearm in an unfortunate first corner pile up at the May Longdon two day, and the resulting ten weeks away from a bike meant he missed out on two of the Bridgestone BSMA Clubman’s rounds and saw the eighth position he held after the first three rounds slip away as he watched from the sidelines. Despite this setback, Josh came back fighting, and took 6th overall in the Cotswold Club Championship, 7th overall in the Rhayader Club Championship, and despite only jumping back on a bike the week before after his arm break, he managed 12th overall at the BSMA Finals. He then rounded the year off by winning the Cotswold Winter series to finally regain his confidence and leave the 65 class on a high. Outside of motocross, Josh enjoys football, playing for his local team Crowle Searchers, and also athletics, swimming and still endlessly pushing a toy motocross bike around the furniture accompanied with lifelike noises wherever he sits! He moves up to the SW85 class for 2015 on a KTM to compete in the Rhayader and Cotswold club championships and the BSMA Clubmans Series Although they both share the same passion on a bike, just like all brothers and sisters, once off the race track and back home, they’ll squabble over anything.