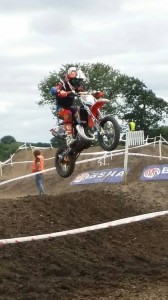 A 10 year-old sporting starlet from Himley is gearing up for 2015 in the best style possible, after Bridgestone fuelled his motocross ambitions with a high-profile sponsorship – just two years after he chose his bike over a youth opportunity with Wolverhampton Wanderers.

Morgan Evans has been behind the throttle of a bike since the age of seven and has grabbed the attention of the world’s largest tyre manufacturer following an amazing 12 months, when he won three championships with his Warley Wasps motocross club.

Bridgestone’s backing, featuring a supply of premium tyres and eye-catching clothing, represents a degree of justification for Morgan, who was given the ultimatum of football or motocross after being invited to train at Wolves’ Compton academy.

Dad John said: “Bridgestone approached us over Christmas and it was an unbelievable feeling to receive the phone call.

“They said they had been really impressed by Morgan in 2014 and wanted to sponsor him this year to underline their commitment to young talent in the sport.

“It means so much to get the backing of a brand like Bridgestone and we really can’t thank them enough for their support.”

John said that Morgan’s decision to walk away from football was a surprise, but a pleasant one nonetheless.

“He was always into his football and was a very good little player. But after he trained at the academy with a motocross induced injury from a day or two before, he was given a choice.

“It was the Wolves or motocross as Morgan wouldn’t be allowed to put himself at risk by riding at the same time.

“He chose his motocross and he is enjoying himself immensely, so it seems to have turned out well for him!”

Morgan’s recent achievements are even more remarkable considering he missed the whole of 2013 with a badly broken arm when crashing, to perhaps underline the point that his football coaches were making.

John added: “It was a really upsetting time when he picked up the injury but like the old adage, he eventually got back on the saddle again after falling off and was fine.

“I actually think he is a better rider now than before the injury. He seems to have improved. I think he has learned a lot from the experience, for sure.”

Having learned to ride without a single lesson, Morgan is now looking forward to a big 2015 with Bridgestone’s backing.

He will be back on his 65cc KTM bike for sessions with highly respected tutor Rikki Priest at his academy,